Part of Pilsen’s appeal to local, independent musicians is its sheer number of recording studios, stages, and other venues for meeting musicians, producing, and playing music. The community's openness to new sounds, and its tight-knit DIY vibe makes this the ideal place to meet and work with like-minded folks in the music industry. Below is a sampler of some of those places. Check out the map for more listings!

ApeTrax Recording Studios--Located on the corner of 18th and South Peoria, ApeTrax is a recording studio which caters to a wide variety of sounds. While their web page has not been updated recently, the images of their newly updated studio are impressive, as is their list of past clients. ApeTrax specializes in “providing artists with excellent quality audio in an affordable and relaxed environment.”

Mariachi Mexico Vivo—formed in 2005, this Pilsen-area group of eight gives a nod to the neighborhood’s Mexican roots. As their name suggests, Mariachi Mexico Vivo specializes in traditional mariachi music, an energetic and upbeat style native to Mexico. They have played for a number of events and at concerts, including a 2008 appearance with Gloria Trevi, a Mexican pop-rock musician, at the Congress Theater.

Miller Street Studios--Specializing in urban music and hip hop sound, Miller Street Studios heralds itself as offering the “highest quality recording capabilities for the lowest rates in Chicago.” They are active in social media, and their blog (managed by the owners and interns) is used not just to promote artists at the studio, but to discuss musical genre, aesthetics, and what makes "good" sound.

Click on the map below to see more studios, stores, and music venues! 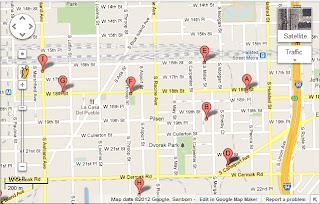 Katherine H.
Posted by The Pilsen Project at 10:29 AM